Had some time, made this PICO-8 edition of Jetpack, 30 hot levels and various enemies.

zxdevs.com made an interview (Spanish) about the game and Pico-8 related topics. I've added the english transcript below.

Jetman does not know how to jump.
Jetman uses his jetpack if you press C.
Jetman can not have more than 4 lives.

We all remember the good old times, what moved you to develop this awesome game inspired in Ultimate Jetpack title?
I was working on an application for PICO-8 games, the idea of a game-making tool for various genres, mainly for artists. All the code should be written by the tool. For this I needed a fresh engine and so I started somes PICO-8 projects to find the most efficient structure for a modular system.

Since I hate working with „programmer art“ and to keep me motivated, I tend to spend some time on artwork. At a certain point, there is so much already done, that it's very tempting to make a complete game out of it.

The first in this series of PICO-8 games was a „Laser Light“ remake which was never released. It turned out too boring and simple and the small resolution of PICO-8 made it too unrealistic for my taste.

Then I made „Rambo – Prison Break“ which focused more on tactics, bigger levels (there is only one designed), „clever“ enemies and in-game UI.
Jetpack re-entered my attention when I was browsing the archive.org DOS Games archive. 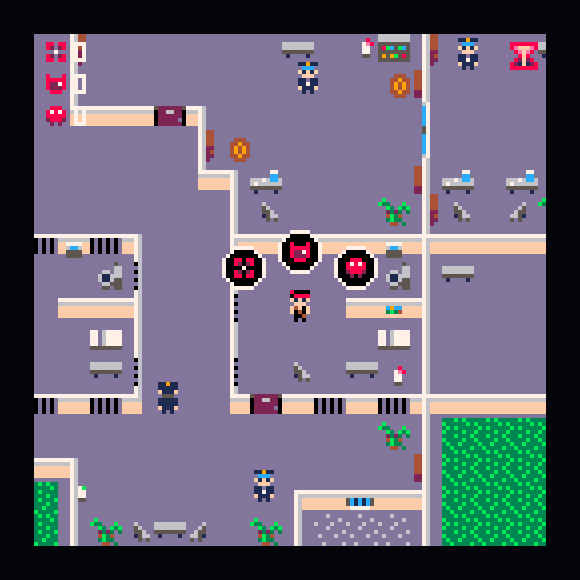 I thought I had seen a PICO-8 version of it already but after a search in Lexaloffle BBS, I was not so sure anymore. Maybe it was just a screenshot of artwork someone had posted on Twitter. And, of course, Jetpack is an awesome game that has to have a PICO-8 version.

Did you live in Spectrum era? Which are your favourite classic games?
Spectrum was released 2 months before I was born. I played with Amiga Commodore and Atari ST and started programming in Assembler on the 80486 PC in 1994.
My favorite games of that era are Monkey Island 1 and 2, The Legend of Kyrandia, Lemmings (why my first project in gmode was a Lemmings/Tetris mix in Assembler), Giana Sisters, Commander Keen, Prince of Persia, Evasive Maneuvers, …

What kind of sensations and emotions did you want to bring to the player?
In the particular case of Jetpack for PICO-8, in level-design I focused on having many situations where fuel gets low if the player does not plan his/her route through the level carefully. I also tried to make sure that the player gets rewarded/refuelled often enough.
The game is challenging the player to use his/her brains and sometimes also to make decissions quickly. It's also really difficult – I doubt that anyone has seen level 30 yet.

Pico-8 brings artificial limitations to the developer but Jetpack has a very long number of stages, was it hard to include all of them?
There is no way to make a real clone of Jetpack in PICO-8. There is not enough space in the map and the display of only 128x128 pixels makes it impossible to „copy“ stages of the original game. Some of my 30 levels are inspired by original levels.
There are also some differences in the behaviour of enemies. The tankbots are much more aggressive in the original game. They are not even following the player in my version.

Do you have plans to include more surprises in future updates?
I don't think I will do an update. This was just a small project I made for regeneration, as a form of artistic expression with little complexity compared to my usual programming work. The community did not respond in a way that would call for an update.

What was more difficult to develop graphics or code?
For me it's always graphics since I'm not an artist. I'd love to work with artists on PICO-8 games. It was not so difficult in this case because I could look at reference images from the original game. I have difficulties with characters and character animations on PICO-8.

Is Pico-8 a good option in order to develop old style games?
Yes and no. It can never be the same style because of the low resolution. This makes PICO-8 its own universe. What remains is the low number of colors and the huge pixels that reminds of the old style games. When you remake a classic game in PICO-8, what you get at best is a „cute“ version of the original game – because of the colors and the low number of pixels available for characters/objects.

What do you think about this era of indie developers making great games?
I think it is great and part of a natural development just like in the music industry and other fields that profit from internet freedom and thus connecting interests all over the planet.

Do you have any advices to people that want to develop with Pico-8 and don't have any experience coding?
If you don't know anything about programming, start programming with PICO-8. LUA is very easy to understand and PICO-8 has only a small list of functions. You don't need any code editors or external files. Each character has a meaning just like every pixel is crucial. Never ever think „this is too difficult“, always think „this is easy“.
If you don't want to start coding because you are an artist, think again. Knowing more can never hurt. If you still don't want, ask a coder on the BBS to make the code parts for you. If you have a good plan and some artwork, I will gladly work with you too.

And, finally what's next?
I don't know. I have some PICO-8 carts with experiments and there still is this half-done PICO-8 game maker application. If you know a good classic game that could work in PICO-8 size and style, let me know !